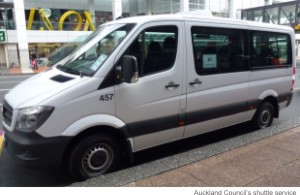 Hypocrisy has been in the news this week. It will come as no surprise that the latest examples involve a local council and environmental activists.

It seems the staff at the Auckland Council who want ratepayers to take up public transport, are not all that keen on it themselves. This week is was reported that council staff are getting about in shuttles, because it’s faster than public transport.

It’s absolute hypocrisy for the local busy body law makers to tell others to catch a bus or train when they don’t do it themselves. We believe they will get a better sense of reality should they be subjected to the very same rules they apply to others. The truth is, most people (including council staff and councillors) don’t like public transport, and for a number of reasons: there’s too much waiting time, it’s too slow, it’s inconvenient, and some feel it is unsafe.

This latest embarrassment of the Auckland Council comes after the Mayor Brown staged a media show to demonstrate support for commuter rail. It was later reported that the Mayor’s ratepayer-funded chauffeur-driven car followed the train to collect him at its destination. It’s so bizarre and would be comical if it were not for the fact that the ruling class can’t see the irony of their actions. The Green Party, quite rightly, was critical of the Auckland Council and suggested staff should use public transport.

The second example of hypocrisy comes from Greenpeace. The organisation was red-faced when questioned by the Daily Telegraph about the travelling arrangements of its programme director at Greenpeace International. Apparently the senior exec’ is less concerned about his own carbon footprint than he is about others. A couple of times each month he commutes 400km each way to work by plane, instead of taking the 6 hour trip by high speed rail.

This is despite Greenpeace campaigning against air travel because, they say, “in terms of damage to the climate, flying is 10 times worse than taking the train”.

Shortly after the commotion Greenpeace advised that in the future its executive will indeed be catching the train! It reportedly said, “We understand the commotion; an environmental group should put its ideals into practice.”

Yes, indeed it should. We expect our own Green MPs and the 10% or so of the population that support them (those who believe they know better than we do what’s best for us) to put their ideals into practice. Shouldn’t we expect MPs, for example, to take public transport instead of using their taxpayer funded taxi chits? And shouldn’t we expect them to embrace technology to save our planet by attending meetings via skype rather than flying and attending in person? They indeed should lead by example!

A recent article in the Independent reported on the electric car phenomenon in Norway, where almost 15% of new car registrations are for electric vehicles. However, the uptake has nothing to do with Norway going green, and everything to do with the perks offered by their government. Those perks include: an exemption from VAT (GST), access to bus lanes, free toll roads, and free parking.

As a consequence there are more vehicles on the roads, which is increasing congestion and forcing more investment in roading infrastructure, which is something the Greens oppose. They say the money is better spent on rail, but even the greenies from Greenpeace don’t want to catch the train.

The article explains that the perks are likely to be removed in 2017, and with it, we expect, the Norwegian enthusiasm for electric vehicles!

Still on bizarre politics, the opposition to the selective removal of windblown beech, rimu, totara and matai trees from state forests, shows not only how ideologically driven the greens are, but how blind they are to common sense.

The background to this is that the cyclone hit the West Coast on 17 April this year felled an estimated 20,000 hectares of conservation forest and caused significant damage to a further 200,000 hectares. If not extracted this huge resource will rot and be wasted.

While surrounded by the intricate Rimu panelling of Parliament’s debating chamber the Greens argued that fallen logs are essential to the lifecycle of the insects that inhabit the forest floor.

They failed to acknowledge the government’s proposal would remove only a “fraction” of the felled timber, with the income going to the Department of Conservation to fund conservation work (we hope for pest control or weed eradication form the vast tracts of land that DoC own).

Extraction is an eminently sensible win-win. Trees that would otherwise rot will be milled (to create jobs), sold (to happy customers to enjoy as do our MPs), DoC will receive additional funding (which it needs), and there will still be lots of rotting material to keep insects (and birds) well-fed for decades to come. One would think the Greens and Labour would welcome the deal. Well, no this is politics not common sense!

Last week we asked: Do you agree that KiwiSaver should be compulsory?

Phil’s comment reflected the No vote. “Freedom of choice is one of the major cornerstones of any worthwhile democracy and it would be totally against that principle to make the scheme compulsory.”

Those who said Yes reflected the view of Colin who said, “There is a large proportion of the population that lack the discipline to save for their future. KiwiSaver was created for them. I don’t want my future taxes to prop them up because they failed to save.”

Or David who said, “Ensures that some provision is made for retirement. Works well in other countries and takes a potentially huge burden off taxpayers.”

We have posted all of your KiwiSaver comments on the 5PM Facebook page HERE.

The National Party is this holding its annual party conference this weekend. John Key spoke to the conference about the instability of a multi-pronged left-wing Government. He said, the difference between a coalition of parties he led was that National would be a dominant force within the coalition.  A left wing coalition, he said, would see the Greens “pulling the strings.”

This week our poll question is: Do you think a government coalition of the left would be unstable?

You can vote by visiting the 5PM website and looking on the right hand sidebar HERE.

Many thanks to those who have already voted in our current policy proposals which are:

“That MMP be abolished and replaced with First Past the Post.”

“That Section 19ZB of the Local Electoral Act 2001 be amended to include the public’s right to demand a binding poll where a council is proposing to grant voting rights to unelected representatives.”

“That a NOTA (none of the above) voting option be included on ballot papers in local and central government elections, with the effect that should NOTA gain the most votes, the election nominations would be re-opened and another election held.”

“That foreign entities and foreigners (individuals who are neither New Zealand citizens nor permanent residents) be taxed 10% of the value of New Zealand property purchases with the funds raised being offered as low interest loans to NZ resident first home buyers.”

Votes may be cast at the Voting Booth on the 5PM website HERE.

“I know of no safe repository of the ultimate power of society but the people. And if we think them not enlightened enough, the remedy is not to take power from them, but to inform them by education.” – Thomas Jefferson

We welcome your comments on our poll or this newsletter on the 5PM Facebook page HERE.

Please don’t forget to help us spread the message about 5PM!

P.S. Please feel free to pass this newsletter on to others!