It’s going to be close.

Three years ago we analysed the accuracy of the poling companies. We found the most reliable to be TVOne Colmar Brunton and Ipredict, and by a long shot. 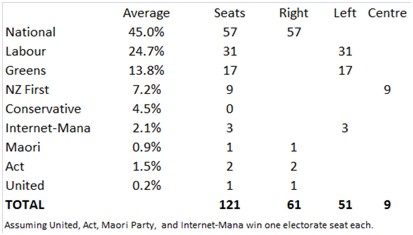 The critical issues are:

The biggest loser out of tomorrows “big reveal” could be Mr Dotcom and the Internet-Mana Party.

Dotcom says he will produce emails to show New Zealand is engaged in the mass surveillance of New Zealanders and collecting their electronic metadata. The Prime Minister says they only have some of the emails and he will produce evidence to show that a mass surveillance plan (in response to cyber attacks targeting New Zealand businesses in 2011) was considered but rejected. If the Prime Minister’s evidence comes up trumps Internet-Mana will have even less credibility than it does already.

To date, Internet-Mana has thrown a lot of money at the campaign and a lot of expletives at John Key, but with little to show for it. The irony is that even if National is damaged by the big reveal, it’s likely to be the Conservative and NZ First parties, rather than the Internet-Mana Party, that benefit.

Dotcom has set himself a high bar of expectation given the staged timing and orchestrated nature of the event. If he does not deliver tomorrow the big bang will be a big fizzer. Hone Harawira and Laila Harre will be worried.

In a press release dated 11 September 2014, the Maori Party says, “it will initiate a review into the entire justice system including the police and courts ensuring the system is aligned with tikanga Maori and will address institutional racism… “We know there is institutionalised racism in the system that is resulting in more Maori and Pasifika peoples being apprehended, arrested, charged, convicted and imprisoned and trialled than Pakeha. All the research and statistics indicate this to be so,” says Te Ururoa Flavell.

We don’t believe this is a case of institutional racism – more a case of the Police apprehending criminals.

The NZ Shareholders Association has written to David Parker to ask a question about Labour’s proposed Capital Gains Tax: “Investors in foreign listed trusts or companies are taxed at present, if bought with the intention of selling for capital gain, and if over NZ$50,000 on the basis of an assumed rate of return of 5%. The Fair Dividend Rate (FDR) tax has been a failure as a revenue generator, and the use of the Australian listed indices has made the preparation of tax returns complex, costly and uncertain. No figures exist to test the success of this tax. Even accounting practices often avoid giving advice on returns involving FDR… It is important that shareholders know before the election whether Labour intends to retain the existing capital gains tax, and to add 15% to it, and whether it intends to retain the FDR Tax, which involves the opening value plus costs, and closing value of the portfolio plus dividends and sales.”

We understand David Parker has not replied. We guess that detail has not quite been sorted out as yet!

Winston Peters has clarified his party’s position on tax cuts – sort of. He says he is against National’s proposed signalled tax cuts for low and middle income earners. He also stated he would not support Labour’s CGT unless they changed the rules about offsetting capital losses. From this one could logically conclude he would support the CGT if that aspect was changed, although to be fair attempting to divine logic from mouths of politicians is not particularly easy during election campaigns!

Labour’s policy is that capital losses could be offset but only against capital gains and not other forms of taxable income, which we would agree with Mr Peters, is “demonstrably” unfair. Exactly what Mr Peters is proposing instead was not stated but it is curious that this appears to be the only issue he is concerned about regarding the CGT – given the policy has so many flaws.

Unfortunately there are a number of lies being told in the election that have been repeated so often that they have become embedded as truth. Here are some of the ones that come to mind:

We disagree with commentators who say David Cunliffe has done well in the leaders’ debates. In every debate David Cunliffe has parroted scripted sound bites and repeated them whenever he has struggled with specifics – like the detail of his capital gains tax; and his displays of being earnest appear so staged and scripted that it just does not work. John Key on the other hand has come across as having a grasp of reality and an appearance of genuineness. On that score there has been no contest.

We have recently learnt that yet another district council is looking at race based privilege around the council table, but they are doing so in secret.

Last week the Whangarei District Council had a behind-closed-doors workshop to discuss appointing iwi representatives onto their standing committees. We can’t see any reason why that discussion and the reports tabled should be confidential, other than councillors not wanting to make the public aware that it is a matter being considered. See “RMA racketeers” HERE.

Last week we asked: Do you expect National’s proposed tax cuts for low and middle income earners will be good for New Zealand?

No country has successfully taxed itself into prosperity and New Zealand has no chance of being the first. However, National if is elected, it needs to be less timid and reduce tax across the board – a flat rate of tax paid by all with no initial tax free threshold.  Peter

Tax cuts will give those in the middle and low income brackets the reasons and incentives to be more productive, earn more and thus pay more tax so the net result will be a similar tax intake to that which it now is. Derek

Tax cuts are certainly required but they should be aimed at company tax. Company tax needs to be substantially lower, say 15%. This would attract large international companies to set up in NZ. We already have all the other ingredients…..an educated population etc. Ronmac

But must be accompanied by alternative revenue sources rather than spending cuts. Graeme

Any help for tax payers is a good thing after all it’s their money! David

Our last poll before the election asks: Have you changed your mind during the election campaign about who you will vote for?

To vote, please visit www.5pm.org.nz and look on the RH sidebar.

All of the poll comments from last week have been posted on the 5PM Facebook page HERE.

And finally, please feel free to pass this newsletter on and help us spread the message about 5PM!