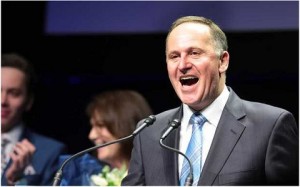 What an astounding election result!

Here are the talking points as we see them, and our thoughts about the future.

We are pleased the election is over – we could not endure the smug and trite mannerism of David Cunliffe, nor the righteous piety of the Green co-leaders, for much longer!

Many thanks for reading these newsletters over the last 32 weeks. We have appreciated your support and feedback. We set up the Five Principles Movement to provide a policy framework that we believed would benefit New Zealand – and we used a democratic process to add new policies suggested and approved by you, our supporters.

We have been encouraged by the frequency with which issues raised in our newsletters have become part of the political discourse, perhaps by coincidence but perhaps because they found their way into the public arena; so we hope that in our own way 5PM has helped to influence the future direction of New Zealand.

Like John Key, we believe New Zealand is a great place to live and has a fantastic future. We think it will only remain so if we vigorously protect the rights of individuals against the corrosive policies of parties that think they know better than the public.

We will be taking a break from our weekly 5PM newsletters for the time being.